Danielle and her unborn baby were murdered outside my apartment on September 13, 2011.  My friend and I were inside my place which looked out onto the parking lot and heard gunshots.

She and her boyfriend, Tony, had moved in some months earlier.

I knew this as my apartment faced into our courtyard and I sat outside every morning and evening – there was a fabulous waterfall that provided that unequalled sound of water cascading down rocks to a pool below. Saying hello to the residents passing through on their way in and out of the complex also gave me great joy and after 5 years, I pretty much knew everyone and was always ready to say hello to someone new!

I’d see Danielle and Tony together sometimes and more often alone.  I was always out early so I’d see Tony pretty much every day on his way to work.  Tony always wore a baseball cap.  With the brim flat.  His signature look.  Although he seemed quite shy, he always replied to my cheerful greetings and sometimes we’d have a chat for a few seconds.

Danielle’s signature, for me anyway, were her purses.  I coveted her shiny silver Louis Vuitton bag.  It would glint in the sun, catching the rays through the open courtyard as we chatted on her way to or fro.

Strange things started happening around our complex.  Someone had an intruder during the night who walked in through an unlocked door asking for Danielle and luckily left immediately when he realized he had the wrong place.  Danielle’s car had sugar put in the gas tank.

Turns out she had a jealous ex-husband.

And on September 11, she and Tony had driven into the gated parking lot to be met by this man as they got out of the car and he fired 4 or 5 shots at her.  Hitting her, I don’t know how many times.  I just know when we heard them, they were close!

When things get crazy, I get super calm.  I was only aware of myself going outside to see what happened.  And as I peered around the corner to the parking lot, in a flash I saw someone jumping the fence and running down the street.  I also saw a guy walking back and forth screaming.  My friend went to Danielle who was slumped between two cars.

I called out to the guy, ”Where’s Tony?  Where’s Tony?”  I was trying to get my bearings, who was who, what had happened I knew it was Danielle but where was Tony?

Through his grief and rage, the man in front of me exclaimed, “I’m Tony!”  Without his hat I hadn’t recognized him.  While I had never exchanged more than a few moments with him up til then, all I could think of was bringing him my calm.  I walked up to him and taking him by the shoulders, gazed intently into his eyes.  And I spoke to him.  I don’t remember what I said.  I just remember accessing my own inner stillness and wanting to surround him with it.

I stayed with him just like that while neighbors scurried around, getting towels for Danielle, who was still breathing at that point and something to keep the parking gate from closing.

My focus was so strong on staying with this man, pouring strength and peace into him.  The rest is just a blur.

The police arrived and one officer came directly to me.  She didn’t know Tony was the boyfriend, not the gunman.

My energy had been so directed to him, it felt like suction between us as he was pulled away.  I tried to tell her that he was the boyfriend, but she was all business.  After all, they were just arriving and piecing together the events which had just taken place.

Drama ensued the next day as the boyfriend was still on the loose.  A SWAT team descended upon our courtyard as neighbors peered through windows.  One neighbor who shared a wall with the couple was huddled behind her couch, not at all knowing what might happen, if there was a confrontation.

Ultimately, the killer took his life as the police found him outside his parent’s home in a neighborhood north of the city.

A group of 5 or 6 of us gathered under the umbrellas in the courtyard after the SWAT guys left, shaken, huddling, drawing close after so much sadness and horror.  Drinking tea and having comfort food from our favorite local restaurant.  It was misty and perfect for mourning and musing.  And processing.  I’d been the only one of our group who was there when it happened and the others listened to me and shared grief.

It was incredible to share with the neighbors.  So bonding to share in the horror and the grieving, both for Danielle and the shattering of our peaceful home.

It had been so shocking!  A woman was murdered right outside my apartment. If the husband had been a bad shot, the bullets could have come through my windows.  The SWAT Team!  The detectives questioning residents.  Absolutely surreal. 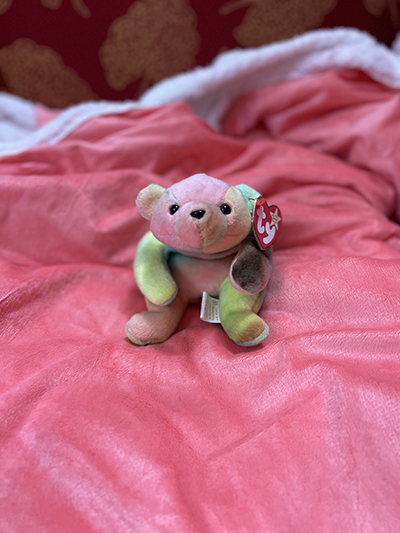 The neighbors chipped in for flowers for Danielle and her baby’s funeral.  When I got the funeral flowers, I bought myself a little rainbow-colored Beanie Baby to remind me of the tragic loss which is forever embedded in my life.

In the end it’s the story of Tony that inspires me to share this experience.  It’s the overwhelming sense of connection I felt with him that afternoon.  After all we’d only chatted a few times.  He was a young, hip, black guy and I was the old, white woman who’d say hi.  But I was steadfast in the KNOWING that I needed to share my soothing energy with him at that crucial moment.   My instinct for calm in the face of chaos.  I was obviously supposed to be there at that moment.  How do I know?  Because I was.

I used to get knocks on my door at all times of the day or night since I was right on the courtyard and so many knew me.  Once a guy had locked himself out of his apartment and asked to use my phone to call the apartment emergency number to get let in.  I’d been terrified when I heard him knocking because it was really late at night.

So when there was a knock on my door early the morning after the shooting, I wasn’t completely surprised.  I opened it to find Tony there.

“I came by to thank you,” he said to me.  “I couldn’t have made it through what happened without you.”  He continued, “On the way to the hospital in the ambulance, the EMS guys kept asking me how I could be so calm?”  I nearly fell to my knees, I was so touched by this gesture.  It was important to him to share.  I was deeply impacted.

I’m using a lighthouse for my logo.  Illuminated, tall, grounded, centered, even in the face of a storm with waves crashing all about.  11 years after I used my centering strength and illuminating light to connect with and calm someone who’d just seen his love and baby killed in front of him, it seems like I’m on the right track.