That was the title of the English 160 paper I wrote on 4/11/79.  You’ll notice I went by Karin back then.  Karin Catherine Bergh.  My parents started calling me Kasey when I was a baby cause I looked like a boy!

Anyway, I recently found a box of my writing from my past.  What a treasure chest!  I’m so glad I saved them.  I have a feeling a variety of posts will come from their content. 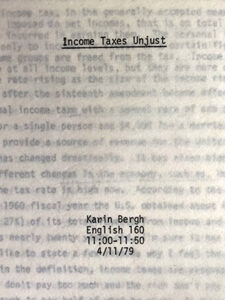 But first, let’s take a look at some of the content of my paper.  It’s so fun to see what I quoted and what information I put in it.  I started with some history of the income tax.

“In 1913, after the sixteenth amendment became effective, congress enacted a personal income tax with a normal rate of 1% on incomes over $3,000 for a single person and $4,000 for a married person.  The tax was introduced to provide a source of revenue for the US.”

I quoted The Encyclopedia Britanica which referred to the amount of taxes collected in the 1960 fiscal year which was about 82% (55% personal tax and 27% corporate tax) of its total revenue from taxes.  Seriously, it was 1979 and I was quoting from the family encyclopedia, using information from 1960!!

Mind you, I hadn’t started paying taxes yet.  I was 19 and working Saturdays at a dentist’s office.  I think I was getting paid about $2 per hour.  I remember my first hourly amount was $1.90 and then I got a ten-cent raise!  It was my boyfriend complaining about how much was taken from his checks, that piqued my interest.

And while I had the usual arguments, even back then, about tax evasion, loopholes, not knowing what the government did with our money, it was my own personal reasons that made me smile.

“Bringing the issue down to my level, I feel it is unjust for me (or will be) because as someone who will just be starting out on my own with a new job etc., I will need every bit of money that I make.  Finding my own place to live, paying for a car, dealing with the rising costs of food, clothing, gas etc. will take a good deal more money than I have been used to spending.”

You know money is super emotional.  We learned about it from our families and carry that knowledge into adulthood.  Families are divided by money.  Divorces happen or don’t happen because of money.

I love that I found this paper.  It was typed on that slick, sheer stuff we used to use cause it was erasable!  I love nostalgia and I love that I am getting a window into who I was 40 years ago!

I’ve worked hard over the years to change the scarcity thinking I grew up with.  Louise Hay, who’s one of my favorite motivational authors, was an influence on changing my thoughts.  She always talks about blessing money as it comes in and goes out.  Especially the going out part.  So whenever I’ve had a parking ticket to pay…grrr, I typically remind myself I’m supporting the city.  Or when I have to pay the dentist co-pay, yikes, I remind myself I’m supporting that person’s livelihood, who in turn is supporting our economy.

This past year, I took a disbursement from my 401k, received my Social Security disability benefits, which were usually low enough to not be taxable, and unexpectedly received money from another couple of sources.  With no taxes taken out to speak of.

The tax bill due this past Monday was a shocker!

I immediately reached out to a friend of mind who’s a Transformational Coach in the area of helping women change their thinking about money.  “Help me,” I asked.  “I owe so much money and I don’t want to pay it out with any negativity.”

She leaped into action and we came up with phrases for me to hold onto such as “This is making the way for something greater to happen for me.”  “I don’t know yet, what is in my future, but I’m blessing this money and the opportunities it’s opening up for me.”  “I’m releasing this sum to the Universe and welcoming prosperity into my life.”

First thing Monday morning, that money disappeared from my checking account.  It is what it is now and I’m embracing my future!  I’m actually truly blessed that I had money to pay it out.  I’m blessed by so much!

As a woman entering her “what’s next” as a Transformational Coach, Writer and Inspirational Speaker, I welcome the chance to bring in money and pay it out, ultimately participating in commerce.

It was fun finding that old paper which prompted me to writing this.