“What if you let go of every bit of control and every urge that you have, right down to the most infinitesimal urge to control anything, anywhere, including anything that may be happening with you at this moment?” Adyashanti

Three years ago in October of 2018, I had to miss two concerts.  One was music from Game of Thrones at the St. Louis Symphony.  The other, The Little River Band.  I’d seen LRB back in the 80’s and hadn’t seen them since for one reason or another.  And now I was going to miss them again!!  For anyone who doesn’t know me, missing a concert is a bit deal, not easily done.

I was in the hospital, you see, with a spiked fever and horrible body aches.  The doctors were trying to figure out what was wrong with me.  It was Saturday, October 6 and the Little River Band concert was that night.  I’d had to miss the music of Game of Thrones the night before when I’d started feeling bad.  It wasn’t until I went to dialysis on Saturday that they found I had a fever and sent me straight to the hospital.  As the day wore on, I had the realization I wasn’t going anywhere.  No concert for me that night.  Little did I know I was at the beginning of an 11 day stay.

No kicking and screaming though.  Once I realized I wasn’t going anywhere, I settled in to let the doctors do what they do.

By the next day they figured out it was a staph infection in the port where I’d been getting dialysis.  In addition to the obvious antibiotics etc. to treat the infection, they had to replace the port so I could have dialysis.  Getting the old one out was a piece of cake.  For some reason they thought they could just poke one back in on the other side of my chest, not under general anesthesia, but with a local….

With the other patient and their family in the room.

That procedure was worse than anything I’d ever had experienced.  I was under a plastic sheet to keep me from infecting others or getting infected myself.  The guy inserting it was literally kneeling on top of me.

I was yelling and cussing like the proverbial sailor.  It was embarrassing and I felt horrible for the people in the room with me that’s for sure.

We’d been trying to get me into a private room and when Henry heard about the inept way the procedure had been handled, I was in a private room that afternoon.

While there was a great outcome from the painful procedure, from there the dominoes continued to fall.  As I look back on my Facebook memories, I’d post that I should be out tomorrow and then in a couple days.  And yet, they stretched out.

What was remarkable was I was in a continual feeling of peace and acceptance.  After all, I’d been avidly studying Eckhardt Tolle’s philosophy of being in the moment and Byron Katie’s of “Loving What Is.” This situation was giving me a huge dose of being with what was happening without needing it to change.  It was noticed by the staff, the doctors as well as my friends and family.  “How can you be so calm?” they’d ask, and I’d reply with joy and certainty, “It’s what I’ve worked so hard to achieve.” 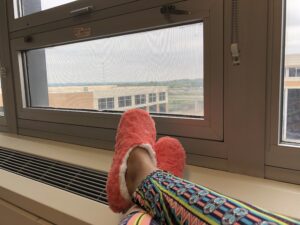 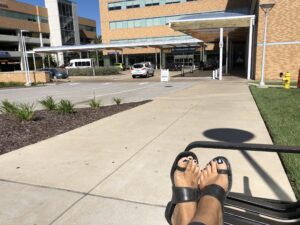 In retrospect, this is where my connection to the lighthouse really started to form.  Calm in the face of a storm.  Unflappable, deeply centered, able to illuminate the learnings from a difficult situation.  I’d been able to be that for others, but not so much for myself, until this super-challenging situation.

I do remember being a bit uppity when a tech came to get me for a chest X-ray that I’d not been informed about.  But I think I was in that space for only about 10 minutes and then I figured that this was what was happening so I’d better go with it.

They found a blood clot in my lungs.  It was from inserting the new port.  Miraculously when they pulled out that port, the blood clot came with it, but I was still put on Coumadin.

And that meant my transplant would have to be postponed at least another 3 months.

Loving what is.  How can anyone love that they got a staph infection, that they had to miss two amazing concerts, that their transplant has just been put off for at least 3 more months?  It feels virtually impossible.  It’s letting go of control though that gives the most peace.  It’s recognizing you are in the hospital and can’t go to the concerts.  It’s recognizing that for some reason, even though your first transplant happened in 3 months, this one is just going to take longer.

I had NO control.  I was sick.  I was in the hospital and I had a blood clot.

I think the Universe gives us an indication it has a great sense of humor when we think we can control things and something so unmistakable happens we recognize it as a sign that whatever control we thought we had, well, we don’t.

One time I was driving on the freeway and the DJ friend of mine on the radio said something I wanted to reply to.  I picked up my phone to text him and I suddenly had a thought pop into my head that driving 70 mph, steering with my knee to allow for the texting might not be the greatest of ideas.  By then the DJ had stopped talking and started the next song.

It was The Doors’ “Keep Your Eyes on the Road and Your Hands Upon the Wheel.”  I laughed out loud!! 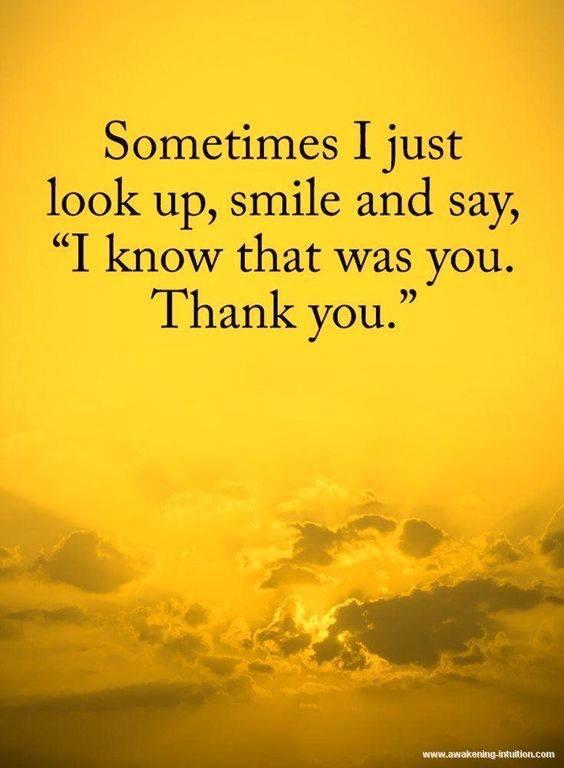 We usually try to control something, a situation, that seems scary, overwhelming or annoying.  But we also think we can control other people…our spouse, our children or our co-worker or friend.  I usually laugh when I realize I’m so in my ego, that I think I know better than the self-driven and Universe assisted growth already going on in everyone else.  I mean, seriously…

In October this year, I was at a retreat where we spent the majority of our time looking at, discussing and experiencing how to let go of control.  How to experience the present moment without a need to change it.

We read an article called “Jeremy,”* written by a young journalist who’d experienced life in a concentration camp and who was so moved by a man he’d met there; he wrote about him 15 years later.  His fellow prisoner was anything but a prisoner.  He was so free in captivity, that everyone was drawn to him.  He dropped bits of wisdom and peaceful acceptance like juicy morsels that sustained those who listened.

Jeremy had long before found his true inner joy.  He didn’t see “the other” as the evil one, he didn’t console, he didn’t dream, for if one dreams of a different reality, upon waking up the bitterness, the hurt would be too much to bear.  The author learned from Jeremy how our stories, fostered inside over and over, filled with hatred of the other and tended incessantly, are really the hell.  Humans live in it anyway.  The concentration camp was the conditions fulfilled.

We witness horrors in our lives.  It’s not a reason to stop living.  He said the joy is in us no matter what and that no condition can kill it.

Being able to do that while in a concentration camp is the ultimate sense of presence and being present. 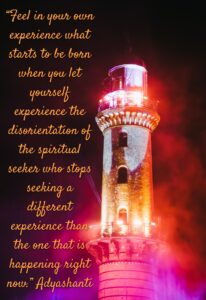 I find my peace really becomes my superpower when I’m with others who are all wound up from their life chaos.  That’s when my “Lighthouse Listening” just drops in.  My serenity in the storm is so palpable it can go right through phone lines or Zoom calls to connect into whoever is in front of me and feeling out of control.  I think my gift is to help people come to center, shedding light so they can see their situation differently, calming and centering them so they grow and can start to recognize when they’re feeling out of control/trying to control and ultimately learn how to re-center or choose not to react next time.

By the way, even though I’ve had practice being calm in all kinds of circumstances, don’t let me fool you into thinking I’m always peaceful.  Our spouse will inevitably trigger us more than anyone so, being human, I can sure forget my resolve to be peaceful, centered and not controlling and get annoyed and even angry “because” of my husband, Henry.   I’m definitely a work in progress!

Maybe I need to make a sign… “lighthouse closed for proprietor to re-center”.

*If you’d like to read the article about Jeremy written by the blind author, Jaques Lusseyran, who “saw” Jeremy in the camp, I’m pasting the link below.